Looking at a map on my way east, I saw that Bowman was a good place for me to stop in terms of location along my route and driving distance. I knew it would be cold, so I looked up a campground in Bowman, because I figured it was best to have electricity and not have the pipes (and me) freeze.

As I approached Bowman in the late afternoon, the weather started to get nasty. When I got to the campground, it was completely covered in snow and not a living soul in sight. What is a cold camper to do?

I went into town but couldn't find the police station or the fire station. I stopped at a convenience store and they kindly gave me the non-emergency number for the police. I called them and their only suggestion was for me to go to the local truck stop - about a half a mile away - and ask if I could plug in.

Well, you and I know the chances of that, but it was snowing and I was cold, so I was willing to try anything at this point. I went to the truck stop and filled up the tank, just in case I had to use the generator tonight. The manager said all their circuits were maxed out but he said some of the hotels around here may have a place to plug in.

He took out the yellow pages, got on his smart phone, and started calling motels for me. Every place he called was full already, but he didn't give up. He kept calling until he found probably the very last available 30 amp hookup in town. And it was mine!

It was $10 for the night and just around the corner, so I didn't have to drive far. Which is a good thing because the roads were covered in at least a foot of ugly brown slush. This was not a pretty sight and as I discovered, not something I enjoy driving in. Bella looked brown, she was covered in this brown slush almost all the way to the roof. She had icicles hanging everywhere. And here she is, in the snow ...  again ... 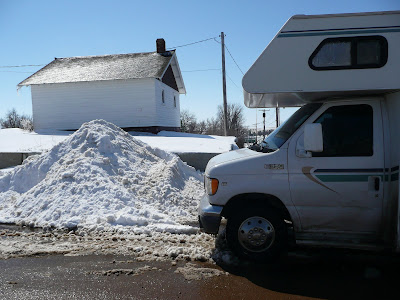