Bella camping in the snow in Ely, Nevada (click here for more info) 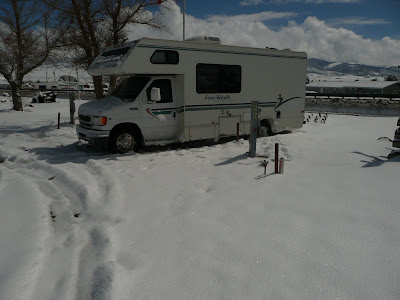 Getting to Ely, Nevada today was quite the adventure, but the kind of adventure I never want to repeat.

I left Utah - after getting an oil change - with a full tank of gas and headed to Ely, Nevada, planning to travel west on Highway 50, known as the Loneliest Road in America.

Shortly after reaching Highway 50, I got caught in a snowstorm. Snow was coming down so fast and hard that it was hard to see the road. After a few miles of debating what to do, I saw some buildings along the side of the road, and decided to stop .... and I got stuck in the snow. Bella would not budge.

I told myself everything would be ok. I had plenty of water, food, heat, a bathroom, and my bed with my pillows and my blankies. If I had to spend the night stuck in the snow, I would be ok.

After a little while, I heard the snowplow go by and thought it would be great to be able to follow it. So I decided to try again and this time Bella moved .... right into the middle of the road where she got stuck again. Now, I was sitting perpendicular to the road, completely blocking one lane, with snow coming down and visibility close to nil. Someone coming down the road might not be able to stop by the time they saw me.

I tried my phone and it had no service. I tried my air card, and lo and behold, I was able to get online. I started looking up websites in Ely to find email addresses of anyone I could, to let them know where I was and to ask for help. And then I planned to cross my fingers that someone would think to check their email in the middle of a snowstorm.

While I was on the computer, I noticed a pickup truck go by and then stop. A good samaritan by the name of Pat came to help. The snowplow guy was getting ready to close down the road because of Bella being stuck on the road, and Pat said he would try to get me out. I had stopped right in front of Pat's in-laws.

Pat said he would get their tractor, get behind Bella to lift her and push me out. He thought he could go below the bumper and not damage it, but that was always a possibility. I told him to go for it.

He went to get the tractor, got behind Bella, and pushed and pushed and pushed .... and nothing happened. I wasn't going anywhere. I heard him stop and I thought he had given up, that Bella was really stuck. But he tried again from a different angle, and after what felt like forever, he got me out !!

I thanked Pat and got back on the road to Ely. It was still snowing hard, the snowplows couldn't keep up with the amount of snow coming down. After a few miles it started to get dark, so I drove the last 30 miles or so in a snowstorm in the dark. The wipers were covered with ice and not much help, it was hard to find a clear spot to look out so I could see the road. I had to go so slow I thought I'd never make it.

But I did, finally. I went straight to a casino in Ely that I knew had rv spots with electric at $15 per night. I had to back up into my spot, and almost got stuck in the snow again. When I got out to plug in the electric, my legs sank into the snow almost to my knees. Once I got back inside, every time I opened a cabinet or cupboard, all kinds of stuff would fall out. Nothing was in its place any more from all the pushing and shaking with the tractor. Thankfully, nothing broke.

I can tell you I was one tired puppy by then. I plugged in my electric heater, took my shower, ate my dinner, and spent the night safe, warm, grateful, thankful, and snug as a bug in a rug.

There you have it, my first adventure on the Loneliest Road in America. Do not try this at home :-)